The Mirage 104 Rallye is a fanonical Rally Car created by JustAlex93. 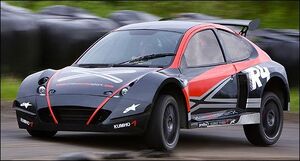 It is a variant of the 104 SuperMini that is developed by Mirage's motorsports division as a cheaper alternative to WRC cars with significantly lower running costs. It was designed for use in rallying, rally cross, circuit racing and ice racing events, with the possibility of a one-make race series.

The chassis is based on a steel safety cage with carbon paneling on the front and rear with a steel-covered cockpit area. The 104 Rallye also features double wishbone suspension with dampers, a naturally-aspirated, 2.5L Inline-4 racing engine producing 350 bhp, and a six-speed gearbox (manual or semi-automatic) and mechanical front and rear diffs with the option of a mechanical or active central differential. The car was produced in both RWD and AWD formats.

Retrieved from "https://motorstorm-fanon.fandom.com/wiki/Mirage_104_Rallye?oldid=6088"
Community content is available under CC-BY-SA unless otherwise noted.