"These turbocharged mid engine hatchbacks are definitely NOT crummy like they once were. Lightning quick off the line, and ultra drifty in the turns. Definitely a go-to for compact tracks with sharp turns. If you want four wheel steering coupled with four wheel drive and a four hundred plus horsepower naturally aspirated V6, these are truly what you need in your disappointment of a life. These savages eat sharp turns for breakfast, but come at the price of having a low top speed because of their short gears."

Ice Racers are a fanonical vehicle class appearing in MotorStorm: Return to the Wild. They are the fastest accelerating small-size class. They can mainly hold their own against Rally Cars, Buggies, Bikes and Racing Trucks, but are unable to match the sheer brute strength of the heavy weight vehicles.

Ice Racers are relatively difficult to control, due to the amount of torque they produce as well as barely having any control in rougher terrain due to their stiff suspension and low ride height. Their acceleration and top speed matches that of the bikes, while their strength matches with the Rally Cars. However, the Ice Racers have some of the worst boost cooling for balancing reasons. Lastly, on the terrain the vehicles favor, they have amazing traction due to their studded tires.

The Ozutsu Tanto was reclassified as an Ice Racer in Return to the Wild. 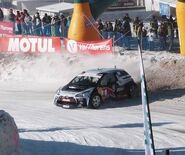 Rasputin Rusalka
Add a photo to this gallery

Retrieved from "https://motorstorm-fanon.fandom.com/wiki/Ice_Racers?oldid=6389"
Community content is available under CC-BY-SA unless otherwise noted.