"If a Supercar and a Muscle Car were to mate, they'd produce one of these bad boys. Powered by varying types of engines with four wheel drive, these guys mean business. They can out-turn Rally Cars and Supercars, but can also dish out the kind of pain that Muscle Cars and Lowriders are also capable of. At that, they make ghastly amounts of horsepower that most who grew up in the 90's have heard and seen. Surprisingly, they can do quite well in certain terrains that aren't asphalt. It, however, is not recommended to take them off of big jumps due to their stiff suspension setup."

GTOs are a fanonical vehicle class created by The Cherrybomber that appear in MotorStorm: Return to the Wild. These vehicles are powered by V6s, V8s, Wankels, or Inline-5s, depending on the region the vehicle is from. They can mainly hold their own against anything up to a racing truck, but engaging in vehicular combat with Mud Pluggers is highly advised against, unless ramming them into a corner. Most of the time, these vehicles can simply spin other vehicles out by driving underneath them.

Due to the GTOs being such an overpowered class, they are locked until Le Circuit Moteur de Pandrosia is unlocked, which also unlocks the Silhouettes, Track Stars, Super Tourers and Aeronauts. 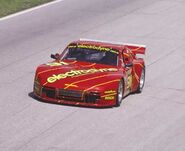 Ozutsu Kimoto (On a side note, this car is powered by a 2.6L twin turbo Wankel engine)

Enthusia 376 Sfidante
Add a photo to this gallery
Retrieved from "https://motorstorm-fanon.fandom.com/wiki/GTOs?oldid=5139"
Community content is available under CC-BY-SA unless otherwise noted.